On January 10 the weather was fine and our turnout was great.  Starting 2015 with twenty-four (24) volunteers was far beyond our expectations.  We had a handful new faces, some high school students from Burlington and Mount Vernon, and of course a bunch of regulars – including our friend Art.

Having this many volunteers allowed us to break into two groups, and complete two significant projects.  We finished everything that we had hoped to complete, which was a lot.  We finished the second reroute of Julieann, and built two large rock walls – so Bonnie & Clyde’s and Julieann are both done.

Below you’ll see Martin Dubek and Jerry Granahan, both standing above one of the two rock walls they built.  Not pictured is or friend Maggie Sullivan, she had just left – but had played a key role in the day’s rock work.  Thanks Maggie! 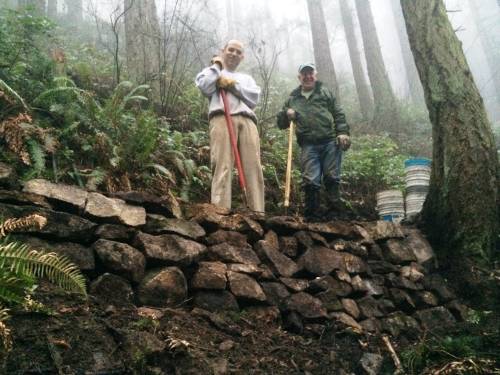 Below is the second rock wall, look at the size of some of the rocks! 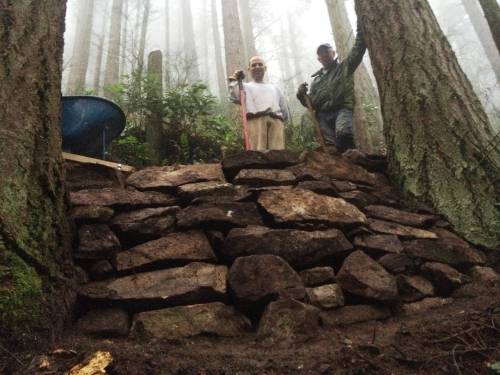 In this third image (below) you’ll see one rock we used to build the above wall. This rock was on average about a foot thick.  The rock bar on top of it is six feet long, so you can see how big it was.  Breaking it up, moving it to where the walls were being built and setting each piece in place was no small task.  Nice work!

Unfortunately, like last time, not enough pictures were taken.  Everyone was working really hard, it was a great session.  Our reroute team did a great job too.  If there was a downside to this session it was my underestimating the number of volunteers we’d have.  We have volunteers that prepare and donate lunch, they need a fairly accurate estimate for planning purposes.

We had twice the number of volunteers I had expected, which is a great problem to have – but that meant we were short on soup.  As the saying goes, there are two types of estimates – lucky and lousy.  Sorry Jenny, it wasn’t your fault…

But we had lots of donated Haggen pastries and Starbucks coffee.  So while we were a short on soup, I don’t think anyone went away hungry.

So next session (1/24), as we hoped, we begin work on the Heart of the Park Public Trail Facility.  We will start by building the connector trail.  It will link the new lower trail head to the existing trails Up Only and La-Z-Boy.

We will meet and at the main park entrance, just below the yellow gate.  We hope to have another great turnout.  Thanks!

This entry was posted in Uncategorized. Bookmark the permalink.